Remember having to scour the earth for the one-year-only 1973 C-body disc brake spindles? What if you have discs already on your 1969-1972 C-body and are tired of paying the dummy tax for rotors? Does relying on a mysterious internet hole for rotors give you a not-so-fresh feeling? Maybe you're not excited about hacking the front end of your disc brake 1969-1972 C-body to replace perfectly good spindles? Or, you passed on a great disc brake swap deal because it didn't have eucharized '73 spindles?

Please bear with me; it's been a while since I did html. Let's get right down to business. You'll need:

If you don't have an Autozone or NAPA nearby, here are the interchanges which I'm sure will work anywhere else:

They're ~$50 / ea. AND BEST OF ALL you get to keep the awesome forged-in-America-by-American-citizens hubs which have been proven time and again to negotiate concrete curbs at highway speeds and shrug. I bet you can't guess what country the aftermarket unicast rotors (and therefore hubs) come from OR what high metallurgical standards that country has!!!

If you're swapping spindles, prepare yourself accordingly; that's not what this writeup is for. Hint: it's a good time to also do all the front end stuff now, since you're gonna need an alignment. Once the spindles and car are one, start by separating the hub from the rotor: grind the crimp barbs off the studs with a dremel or similar abrasive tool. Push out with a press or precision high speed hammer. An auto parts store might help you press them out, too, if you have neither. *Since the new studs lack the tangs, you won't have to repeat this step ever.*

(I'll update this step with a helpful picture soon) Here's the part which requires a bit more effort & thought than a '73 swap. Don't worry, you only have to do this step once. YOU NEED TO CHECK THE RUNOUT OF THE HUB FACE WHEN INSTALLED ON A SPINDLE. Since the factory just did a rough turn on the hubs before assembly, and then turned the rotor/hub assembly together, there's no telling how lazy the shop was when they did the rough turn of the hub. I guess I shouldn't say "lazy." More like, it didn't really matter, so they didn't waste time getting each hub to run nuts. But YOU (or somebody) will have to. Just like it sounds, install the hubs hand tight (enough to take all slack out) and position the stylus so that it's measuring runout of the hub face (the part that the rotor is about to sit on). The amount of "warblyness" (or runout, if you prefer) will be how much the rotor AND wheel will "warble" (runout) at that diameter. It will only get worse the further away you get from the face. Just a guess: Up to 0.003" TIR is probably okay (?). Personally, I wouldn't try that much, but YMMV. You might get lucky at this step -one of mine was okay and one wasn't, for the record- but if you are UNlucky:

Take the offending hub(s) to any place with a brake drum / rotor lathe and tell them you want the hub mounting face to run nuts to the bearings. This will cost you some money; it shouldn't be much more (if at all) than a usual rotor or drum turn would cost. Again, this is a one-time cost.

The new rotor is dimensionally identical to the old one. Notice the funky slice they put in around the hub face...wheel clearance for trucks? I guess we'll never know, which is great because nobody cares and we have beer to finish. 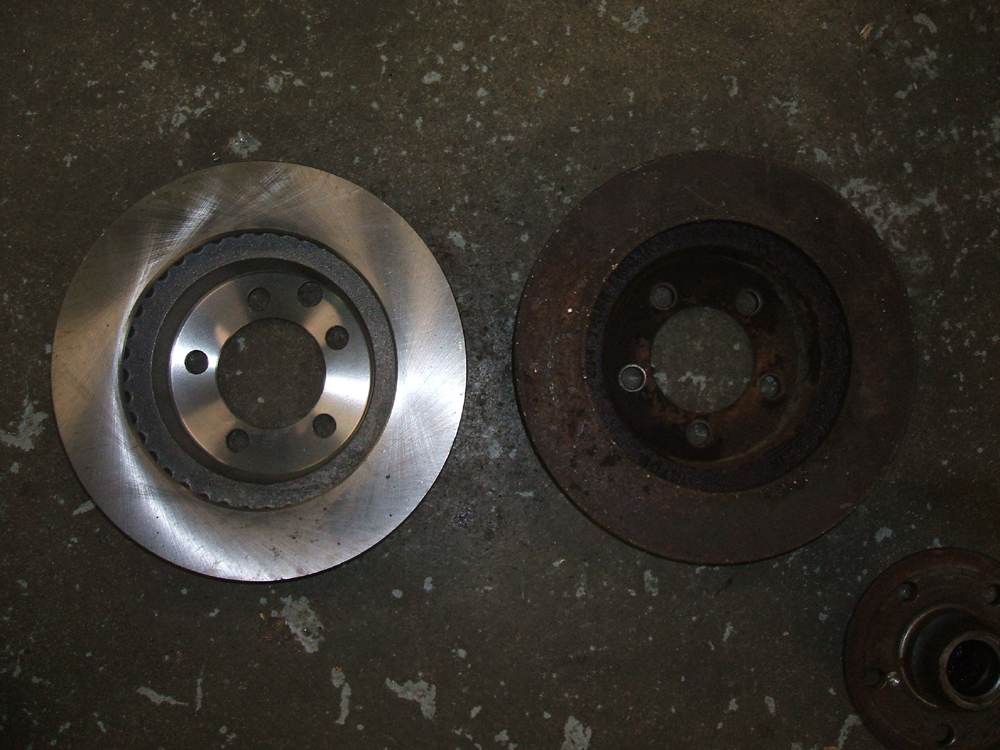 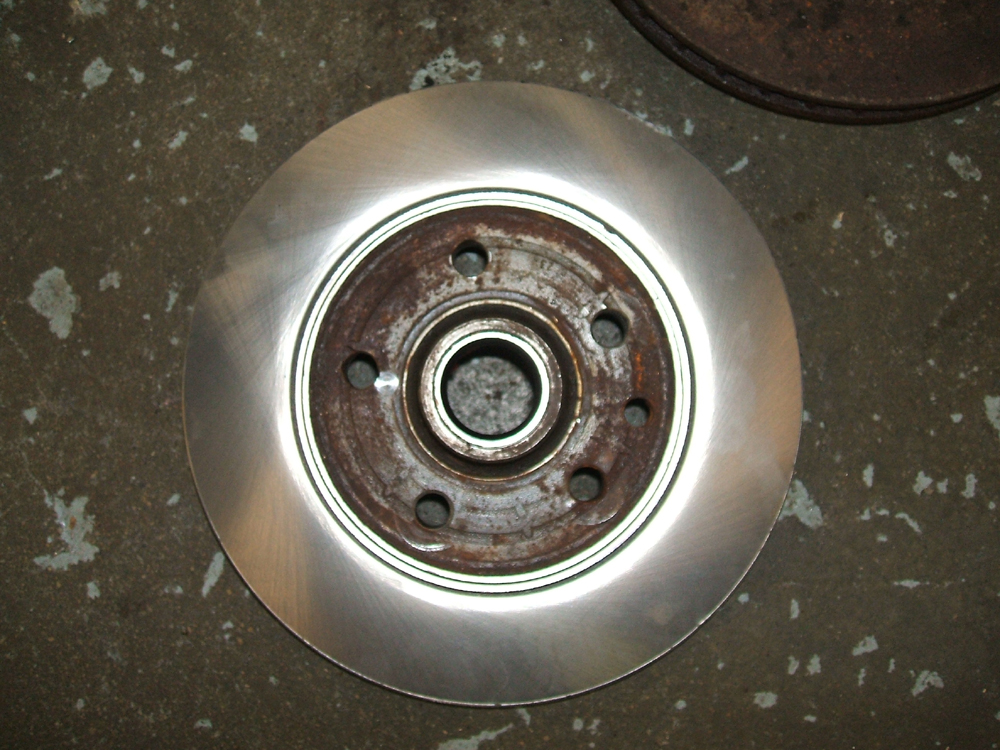 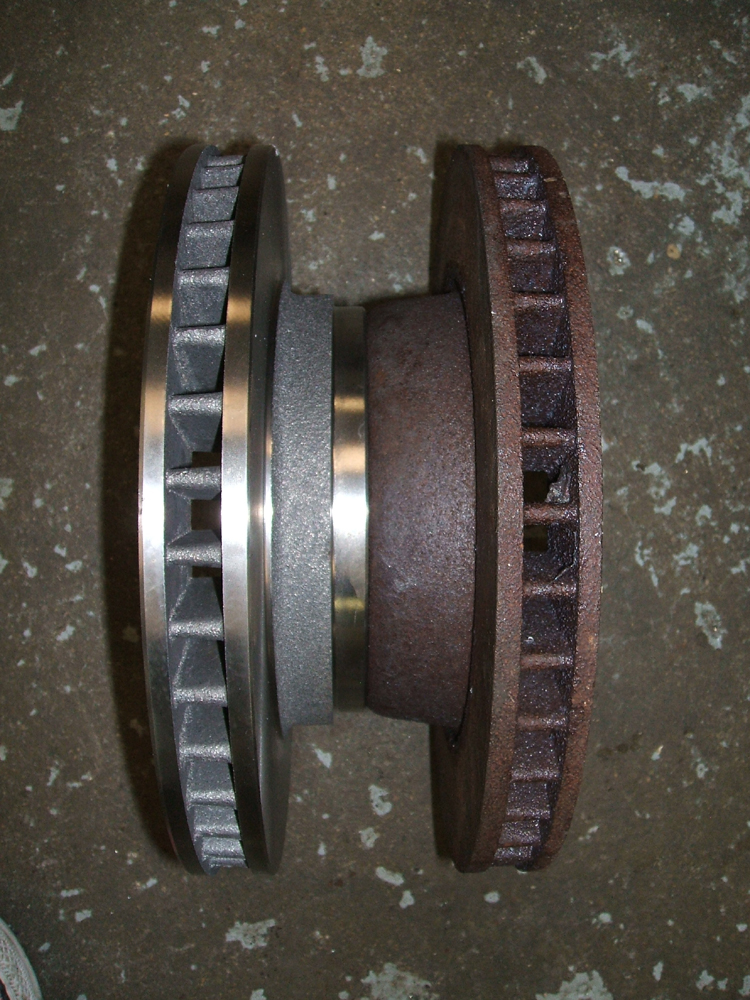 Mash (or carefully pull, using the lugs and torque) the hub and rotor back together with the new studs and you're in business. Next time you need to re-rotor: press the studs back out, then mash the new rotor back on. Barring a seized caliper or frequent stunt car rental, it shouldn't be that often.

Is a little labor on the front half worth all this? If you're Jeff Bezos or Michael Bloomberg, then no. But if you're reading this, chances are YOU'RE not, either.