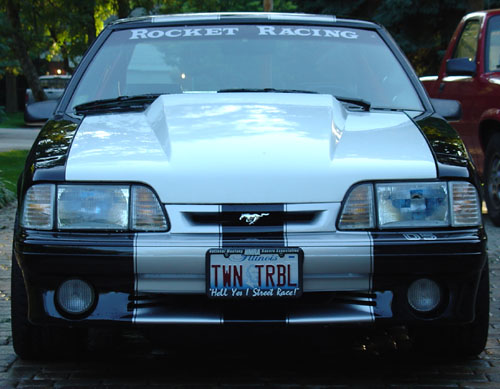 Hmmmm, it doesn't look like a fast Mustang, especially with those 17" rims. And that, friends, is what we refer to as A SLEEPER! In fact, it doesn't even sound like a fast Mustang. Thanks to the EEC-IV, Incon Muffler Bearings, and Dynomaxes, the car hums like a stock 5.0. But why take my word for it? Bring your Viper, C5, Porsche, Ferrari, or whatever to Chicagoland and find out the hard way!

"Oh yeah, well, Mustangs are belly button cars - everybody has one." Well, that may be, but how many Cobras do you see painted Mercedes Glazurit black, striped and buffed to a mirror shine by an Italian guy named Vince? The stock steel hood is stored safely in the rafters, and may find its way onto the car again - this one was employed to give red hot air another "out." It will get painted.

The first time we took this car out with the Incon kit, it obliterated the tires in 1st, 2nd, and 3rd gears. It was then that I truly realized how nice a "serious" car can be. No Dzus fastners, a real interior, a small cam, small gears plus an overdrive, extremely quiet exhaust, runs on 93 all day long, and easy starting in any weather.

Well, first off, it exploded. Sort of. Sally returned to GLD to finally bat off her long awaited 10 and met disaster. Yep, blown headgasket. Except this time, nobody felt bad about it, and she made it home under her own power.

Since the last update, we almost burned the car to the ground after a few aborted runs at Byron in Summer 2004. No amount of tweaking could get the TwEECer to respond to the new meter and injectors, which ultimately resulted in a decreasing injector pulsewidth as RPMs increased. Every run or test street blast resulted in normal fueling (11.5:1) to about 3500 RPM, and then leaning to 14:1 or higher by 6000. Nobody had any answers as to what was causing this, so Shaun broke down and bought a F.A.S.T. and a plug n' play harness. So long, injector resistor box. :( Also, a built AOD - with a fresh PI converter - was swapped in place of the Tremec (which was an entire debacle unto itself), along with taller front coil-over springs and Strange 10-way adjustable shocks for better launching.

After all the new goodies, Sally made 460 RWHP on LS1speed's dyno (ls1speed.com) with the usual 10 lbs of boost, 11.5:1 and 21o of timing. At the track, with the tune untouched, Shaun went 11.99 @ 120 with a 1.9 60'. 1000' into a hot lap (this time with 23o of timing), the car began sounding like a fucked up Harley / lawnmower. Despite backing out, the car went 11.96 @ 110. Oil pressure and coolant temps were fine, and we noticed a loose header bolt on inspection, and the block is o-ringed, so we ruled out headgasket failure. Once on the rack, the devastation was immediately apparent - the bottom part of the gasket on #8 (?? I have no idea what hole that is, what with the crazy Ford cylinder numbering scheme) was squeezed out between the block and head, and the spark plug wire was getting a little charred from the blowby. This was impossible to see with the Incon manifolds in the way, so we didn't feel that bad. The tune was perfectly safe this time around...who knows when the gaskets really got hurt? Anyway, this motor has been together for 2 years and has seen plenty of unsafe, boosted blasts, so one might tell us to count our blessings.

There's a new stroker A-4 shortblock sitting on the stand, waiting for new pistons and clean-up machine work / balancing. Will it, along with two too-big turbos and custom pipes, make it into the car for next summer? Stay tuned! We just need to find someone that can weld and fab stuff. Any ideas?

Ok, time to get serious, well, more serious. 42# injectors are for kids, so are Pro-M bullet meters. I finally bit the bullet and bucked up for a real fuel system. The details are as follows: